The Story of Acoma

Discover the centuries-old history of New Mexico’s southwest Indians. Acoma Pueblo offers a window in time where Native people carry on the customary traditions of their ancestors through Native American pottery making and tribal celebrations.  Educational tours and cultural exhibits are designed to generate a broader and deeper understanding of the Acoma People.

Acoma Pueblo is built atop a sheer-walled, 367-foot sandstone bluff in a valley studded with sacred, towering monoliths. Since 1150 A.D., Acoma Pueblo has earned the reputation as the oldest continuously inhabited community in North America.  The mesa-top settlement is known worldwide for its unique art and rich culture.

A federally recognized Native American Tribe, Acoma Pueblo has a land base covering 431,664 acres and is home to over 5000 tribal members with more than 250 dwellings, none of which have electricity, sewer, or water. In 1629, construction began on the massive San Esteban del Rey Mission, a Catholic mission.  Both the Mission and the Pueblo are Registered National Historical Landmarks and are on the National Register of Historic Places. 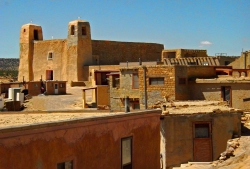 Acoma Pueblo was named the 28th Historic Site by the National Trust for Historic Preservation (NTHP) in 2007 and is the only Native American site to be designated. Acoma assists the NTHP to expand its preservation activities and mission beyond bricks and mortar and into community development. NTHP members receive a discount for the Pueblo tour by showing their membership card.

The main modal is empty.